Ahmad Awais
For the latest documentation and steps on getting started, use the Create Guten Block GitHub repository → as your primary source of information.

Excited to release the create-guten-block toolkit today. In this post, I am going to share what is create-guten-block (cgb), what is the motivation & philosophy behind building this dev-toolbox, and the story of how I am releasing it to the public after ~200 commits and ~90 version releases. Let’s start with intro first…

Create Guten Block is not like other starter-kits or boilerplates. It’s a developer’s toolbox which is continuously updated. Since it has zero-configuration, you can always update it without any changes in your code. That’s actually why I built it.

it at GitHub for updates, to show appreciation, and do report back any issues you face.

Well, it’s a create-guten-block is a way for you to start building Gutenberg blocks without having to configure or setup anything. It’s a zero-config-js #0CJS toolkit with a single dependency in your projects — which will stay up to date.

Your dev-environment will have everything you need to build a modern next-gen WordPress Gutenberg plugin:

The tradeoff is that these tools are preconfigured to work in a specific way. If your project needs more customization, you can “eject” and customize it, but then you will need to maintain this configuration.

Well, it’s really hard to configure things like Webpack, React, ES 6/7/8/Next, ESLint, Babel, etc. before you — even start writing — a Hello World Gutenberg block. Then there’s the fact that you have to maintain and constantly update your configuration with all the new tools and growth in the JavaScript community — that’s not an easy thing to do.

create-guten-block hides all this configuration away in an optimized package that we call cgb-scripts. This package is the only dependency in your projects. We keep cgb-scripts up to date while you go ahead and create the next best WordPress themes and plugins.

“I’ve heard from several people that they’ve consolidated their companies tool dependencies into a single package and this worked really well for them.” — @Dan_Abramov

So, that’s what I dreamt about for the next couple of months. How do I solve this problem for the WordPress community, eh? 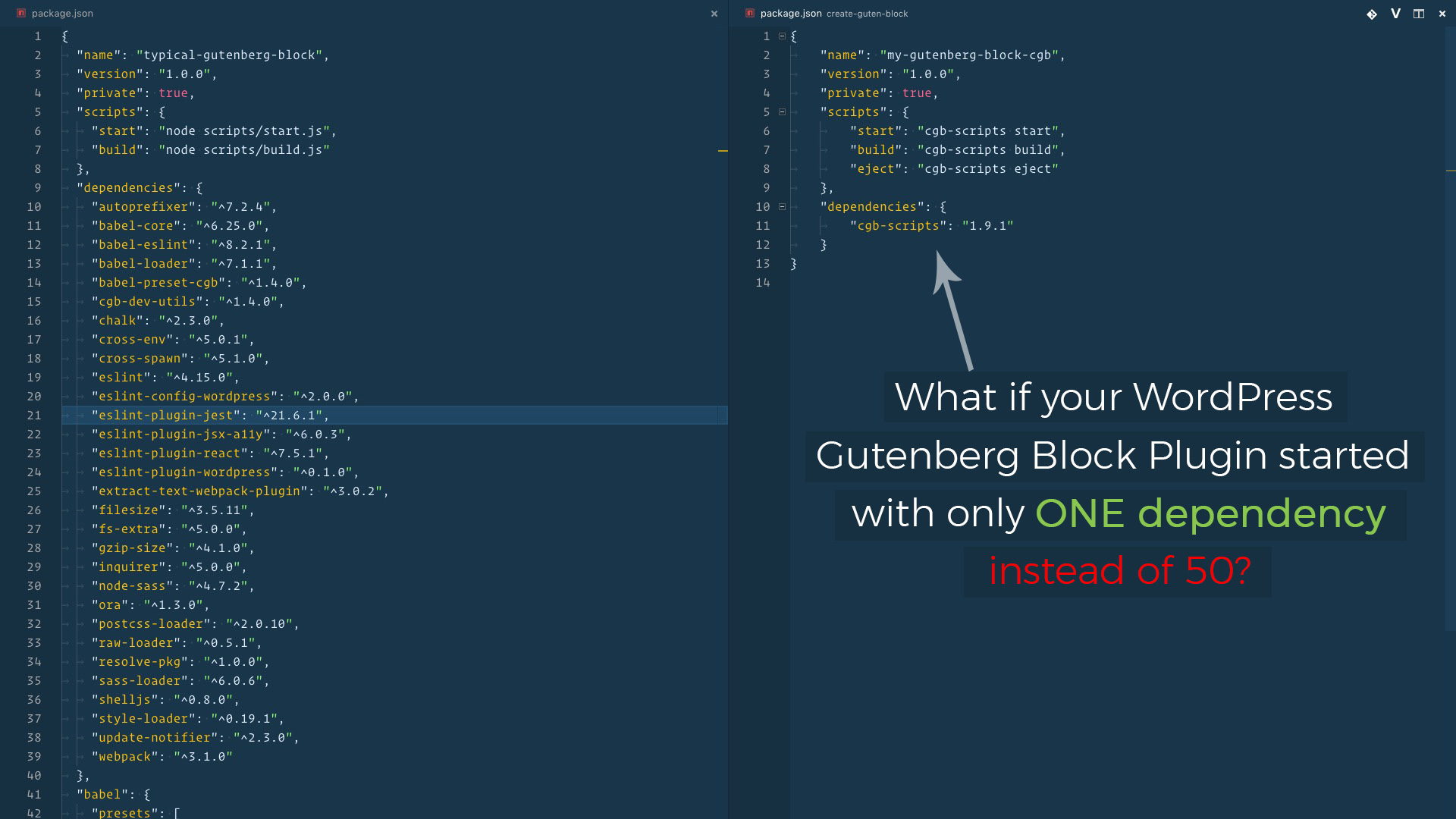 After building WPGulp and Gutenberg Boilerplate and lot of other open source software that thousands of developers are using — I started receiving lots of feedback on how it’s limiting in its architecture which is complex — and by the way, these boilerplates went stale quite a few times.

I knew this was not right.

Developers told me that they built Gutenberg blocks with ES5 because the amount of time required to configure, set up, and learn tools like Babel, Webpack, ESLint, Prettier, etc. wasn’t worth it. And I was like whaaaat?!

So, yes! I went ahead and built a solution — a zero-config-js #0CJS WordPress developers’ toolkit called create-guten-block! Enough talk, let’s stop it right here and actually explore the toolkit.

It’s really easy to get started with create-guten-block. Just install it as a global module and run it to create your next-gen Gutenberg block plugin for WordPress.

Did I tell you to star

it at GitHub for updates and to show appreciation or to report back any issues you face? Hmm… lemme think?!

OK! OK! Let’s get you started!

If you don’t have Node.js + npm installed then read this step, otherwise jump to the Step #1 below.
In case you are an absolute beginner to the world of Node.js, JavaScript, and npm packages — all you need to do is go to the Node’s site download + install Node on your system. This will install both Node.js and npm, i.e., node package manager — the command line interface of Node.js.

Install create-guten-block globally on your system.

You’ll need to have Node >= 8 on your local development machine (but it’s not required on the server). You can use nvm(macOS/Linux) or nvm-windows to easily switch Node versions between different projects.

Hold on, it’ll take a couple of minutes to install.

Now all you have to do is create a Gutenberg block and start building. It’s done by running the create-guten-block command and providing it with a unique name for a WordPress plugin that will get created. The name can a single word or hyphenated multiple words.

Make sure to run this command in your local WordPress install’s plugins folder i.e. /local_dev_site.tld/wp-content/plugins/ folde — since this command will produce a WordPress Gutenberg block plugin that you can go to WP Admin

It will create a directory called my-block inside the current folder. Inside that directory, it will generate the initial project structure and install the transitive dependencies:

No configuration or complicated folder structures, just the files you need to build your app.

Once the installation is done, you can open your project folder and run the start script.

You can also use yarn start if that’s your jam.

This runs the plugin in development mode. To produce production code run npm run build. You will see the build messages, errors, and lint warnings in the console.

And just like that, you’re building your next WordPress plugin with Gutenberg, React.js, ES 6/7/8/Next, transpiled with Babel, which also has ESLint configurations for your code editor to pick up and use automatically.

There are just three scripts that you can use in your create-guten-block workflow. With these three scripts, you can develop, build, and eject your plugin.

Open the terminal app and run the following commands.

Create-Guten-Block has been tested to work on macOS, but must also work on Windows, and Linux. If something doesn’t work, kindly file an issue →

You almost never need to update create-guten-block itself: it delegates all the setup to cgb-scripts. But as this project matures, there might be a few changes over time and you can re-run the global install.

When you run create-guten-block, it always creates the project with the latest version of cgb-scripts so you’ll get all the new features and improvements in newly created plugins automatically.

To update an existing project to a new version of cgb-scripts, open the changelog, find the version you’re currently on (check package.json in your plugin’s folder if you’re not sure), and apply the migration instructions for the newer versions.

In most cases bumping the cgb-scripts version in the package.json and running npm install in this folder should be enough, but it’s good to consult the changelog for potential breaking changes.

We commit to keeping the breaking changes minimal so you can upgrade cgb-scripts painlessly.

Go read the entire changelog at this link — CGB Changelog →

Nothing’s ever complete, so bear with us while we keep iterating towards a better future.

… listen to → A million dreams!

I (Ahmad Awais) am a Full Stack Web Developer and a regular core contributor at WordPress. My significant other (Maedah Batool) is a Technical Project Manager, and she’s also a WordPress Core Contributor. Together with our team, we run the TheDevCouple.com.

If you’d like to get insights into our love for open source software, professional full stack development, WordPress community, the growth of JavaScript or growing a family, building, and bootstrapping a business, then subscribe to our premium newsletter called ↣ The WordPress Takeaway!

If you’d like us to keep producing professional free and open source software (FOSS). Consider paying for an hour of my dev-time. We’ll spend two hours on open source for each contribution. Yeah, that’s right, you pay for one hour and get both of us to spend an hour as a thank you.

This FOSS (free and open source software) project is built, updated and maintained with the help of awesome businesses listed below. Without the support from these amazing companies/individuals, this project would not have been possible. Make sure you check out their awesome services and products. They’ve earned it.

This project is inspired by the work of more people than I could mention here. But thank you, Dan Abramov for Create React App, Andrew Clark, and Sophie Alpert from React.js team. Kent C. Dodds for his open source evangelism, WordPress Core Contributors, Gary for keeping everyone sane, Gutenberg developers Matias, Riad, Andrew, also of course Joen, Greg and contributors, and other WordPress community members like Zac for his course on Gutenberg, and also my friend Morten for all the #Guten-motivation, Icons8 for the awesome icons, Maedah for managing this project, and to everyone I forgot.

Yes, that’s not all done, yet. I have managed to change the codebase and release many updates by now, before actually announcing a stable release.

The next step is to get this toolkit tested and mature the entire app to release version 2.0.0 for that not only do I need your support, I ask that you hop on board and contribute — that’s the only way forward.

I have created a GitHub issue with the title of

Creat Guten Block 2.0 Goals + Call for Contributors! In there I have listed a rough roadmap to version 2.0.0.

Goals listed below — without any order of priority:

What do you say? Comment below. And make sure you’ve stargazed

the GitHub repo for updates!

Building create-guten-block was a lot of work. It’s easily one of the best software I’ve written and I have exciting improvements coming.

It would mean the world to me if you Tweet about it, try it out, and contribute.

Feel free to reach out and say