When I was a kid, I wanted to be an astronaut — exploring space and whatnot. But I was afraid of heights, so whenever my mother asked, I’d say I’ll settle as a scientist who’d invent things like rockets.

Years went by, reading space exploration missions, then aspiring to meet Elon Musk (the one who rebelled? Right?) — I started to realize how far away I was from actually becoming a rocket scientist.

Anyhoo — I ended up becoming an engineer, an Electrical Engineer. Spoiler alert, I never liked it. It was boring; it was a lot of Maths. At the same time, I had always wanted to invent things and name things (it’s what scientists do?!). So, I started writing code. I loved it. I created software packages left and right — gave them names. Felt like I was inventing things.

Right after graduating from college, my curiosity got the best of me; I switched my career (even though I had a good GPA and a job waiting) — landed a software engineering job — and became a software developer.

For over ten years, I’ve been contributing code and docs to the open-source community. It’s been my way of achieving what I wanted as a kid. My code runs on almost every WordPress website, tens of thousands of Node.js, React, webpack apps/sites, and millions of developers use hundreds of packages I open-sourced. It’s fulfilling, and I’m always humbled by it.

I recently received a gold GitHub Stars Award by GitHub (Microsoft) to celebrate my open-source work. I am in awe of the response I received from the community.

Yet there’s one more thing that happened, which means more to me than what any of you could imagine…# 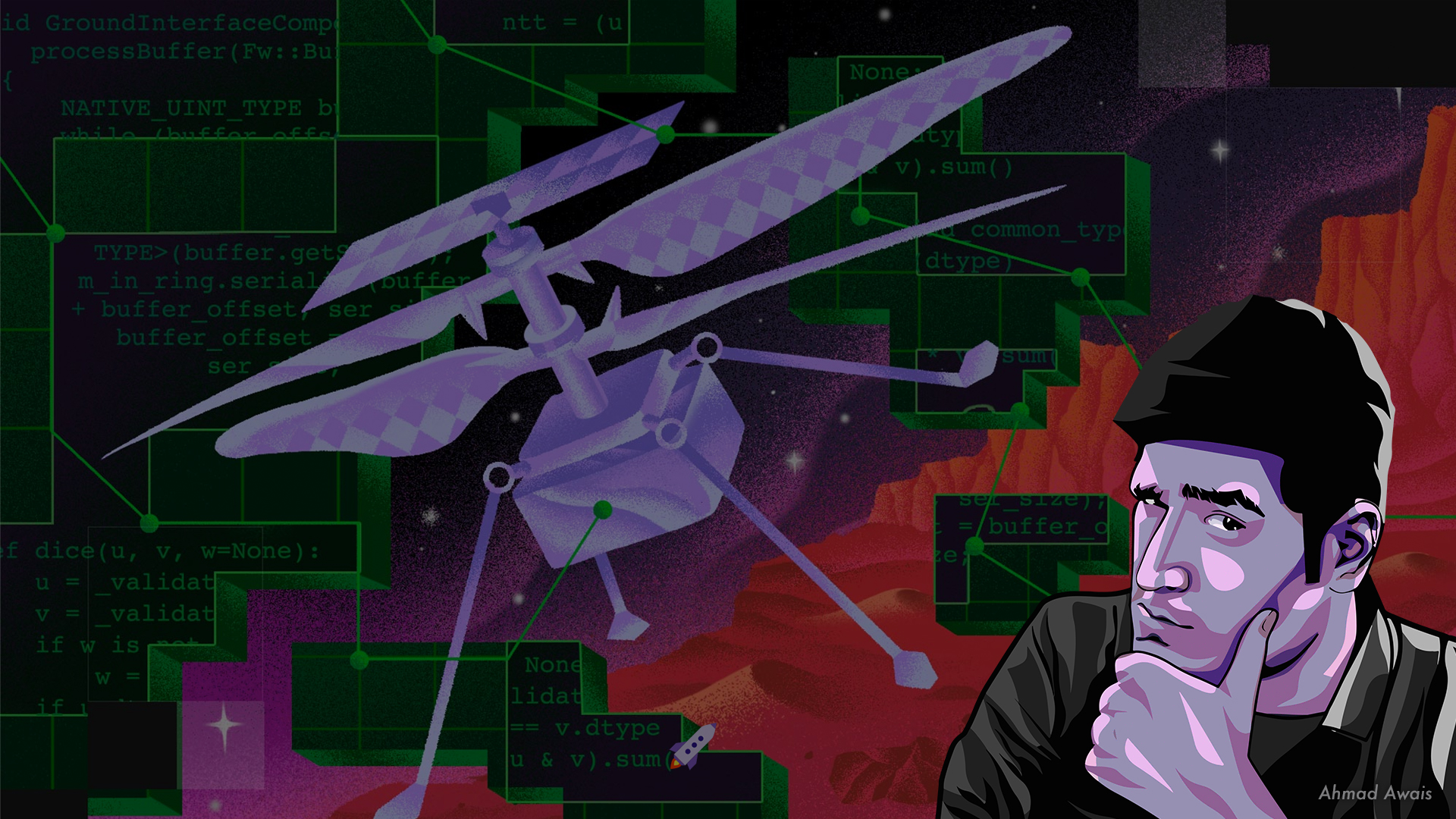 Lo and behold, I just found out that:

I mean, my open-source code made it to Mars. 🚀

Through open-source, I contributed code to the software of Mars 2020 Helicopter Mission, also known as NASA’s Ingenuity Helicopter. My teeny-tiny-super-small contribution was a part of humankind’s first successful attempt at a powered, controlled flight of an aircraft on another planet. 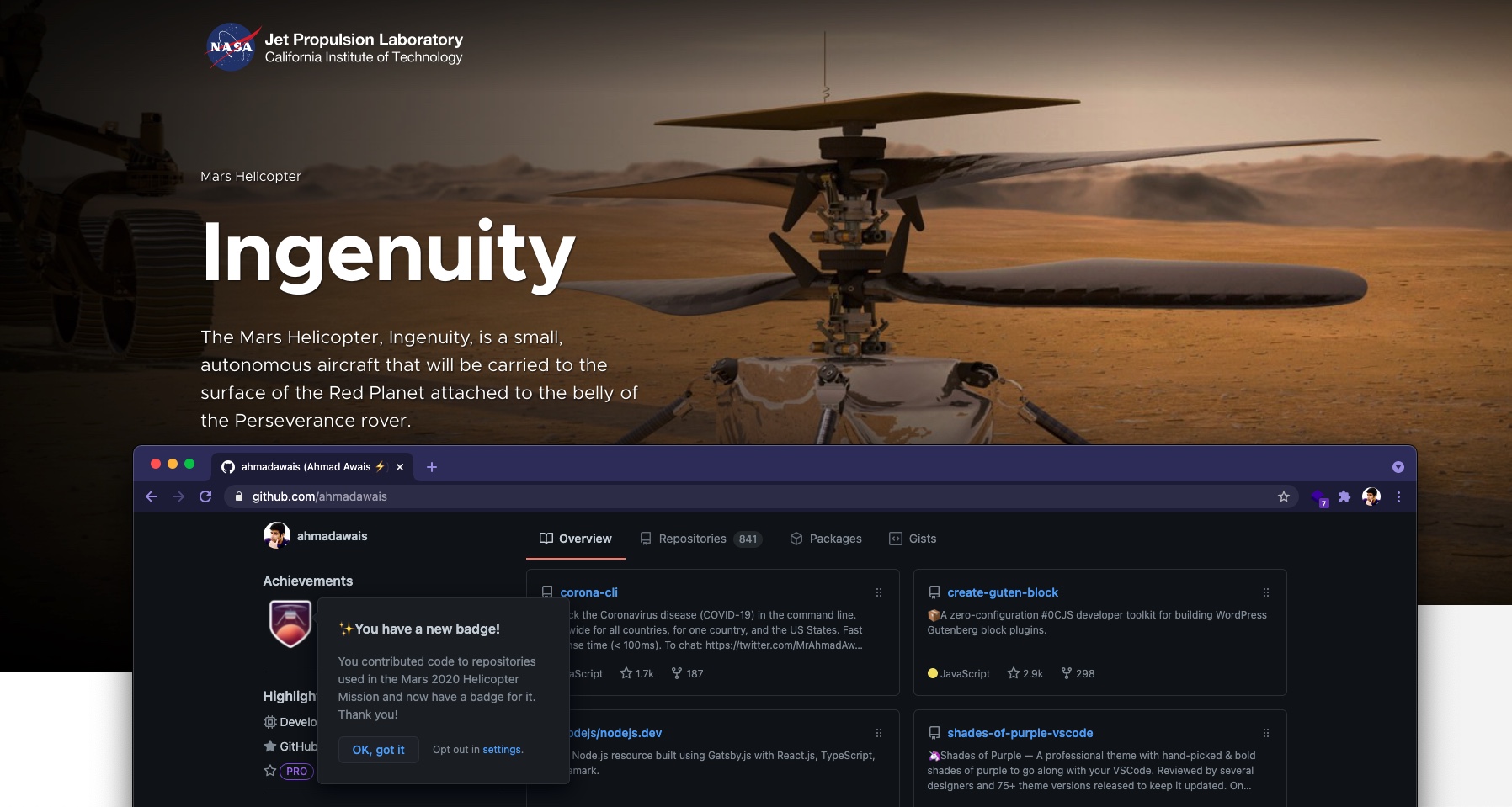 I can’t believe it. I’m here on Earth, but my code is on Mars. I was part of something that’s never been done: controlled, powered flight on another planet. 117 years after The Wright brothers’ first flight on Earth.

Honestly, I have hundreds of open-source repositories and 300+ PRs but this, well it was a super simple link fix in the Twitter Bootstrap’s core — for the curious. Power of open-source, I guess. Made my day. For my inner child, it’s totally worth celebrating.

You can check it out and follow my GitHub profile @AhmadAwais.

The Ingenuity Mars Helicopter departed Earth for its 293 million mile trip to Mars aboard the Perseverance Rover last July. However, Ingenuity’s most important journey was only about 10 feet. That’s the altitude the small helicopter hovered just above the surface of Mars, marking a major milestone for humanity: the launch was the first powered flight on another planet and proof that it’s possible for a helicopter to achieve lift-off on Mars.

In order to fly in Mars’s thin atmosphere—with an atmospheric volume less than 1% of Earth’s—NASA’s Jet Propulsion Laboratory (JPL) had to keep the weight of Ingenuity below four pounds (1.8kg), including blades, a motor, a power supply, solar panels, and enough computing power to monitor instruments and keep the helicopter from deviating from its pre-programmed course. Packing everything Ingenuity needed into such a lightweight rotorcraft was an engineering feat that lived up to the project’s name.

“All the boundaries we have in our engineering disciplines, we couldn’t have them anymore,” Ingenuity Project Head MiMi Aung told the Making Space podcast. “Everybody had to pitch in. Every gram was a challenge.”

The team that built Ingenuity is much bigger than JPL’s 6,000 employees. Behind the 4-lb helicopter were contractors from recognizable companies like AeroVironment, Lockheed Martin, and Qualcomm. And behind its expansive software were thousands of open source developers around the world, unaware of the gravity of their contributions.

Nearly 12,000 people contributed code, documentation, graphic design, and more to the open-source software that made Ingenuity’s launch possible. To celebrate this moment in open source history, GitHub added a new badge to profiles of those contributors. 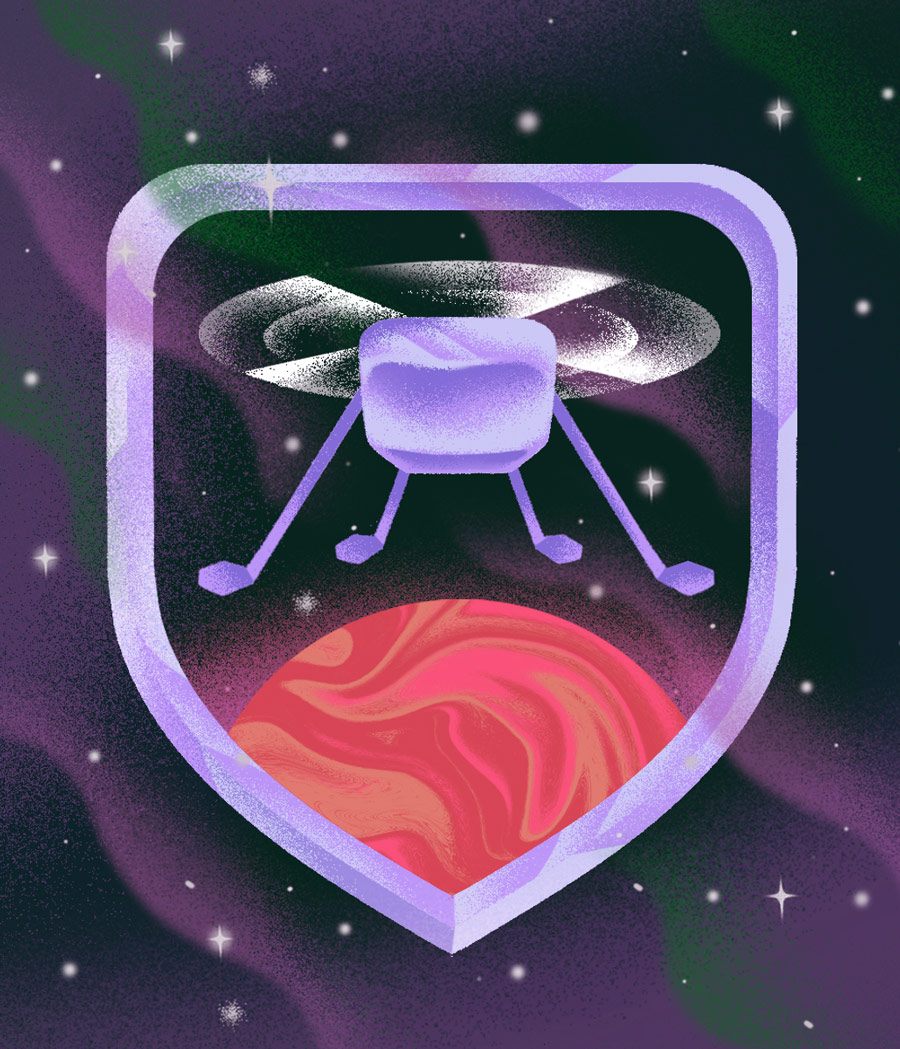 Nat Friedman, GitHub’s CEO, wrote about it, and the ReadME project by GitHub wrote about it in Open Source on Mars: Community powers NASA’s Ingenuity Helicopter.

Open-source has a place for you…#

Over the last week, when I shared the pictures of a gold GitHub Stars Award I received from GitHub — I got a lot of questions from the dev community on Twitter, LinkedIn, Facebook (and in groups like this, this, and this) about how to get started with open-source, how do I find time to do that and more.

There are so many projects that would love more contributors. It doesn’t matter if it’s in the form of documentation, community management, writing code, or something else — there’s always a place for you, for everyone.

If you find it hard to get started, I’d recommend you start by sharing bits and pieces of repeatable code snippets you write in more than one project. So many projects need help with documentation; if you’re a writer, you can contribute that way. No contribution is too small.

Use your code for good. Peace!

Thanks, Ahmad. Your contributions to the GitHub community prove that each of us can contribute individually to create something much bigger than ourselves.

P.S. The U.S. Embassy featured my work on their platform (coverage on Twitter · Facebook · Instagram · U.S. Consulate General KHI). Thank you to everyone who has supported me. To say that I am humbled and grateful would be an understatement. Alhamdulillah, received a great deal of press and media coverage.

My Open Source Contribution to NASA’s Ingenuity Helicopter Made it to Mars. 🚀

I mean, through open-source, I contributed code to the software of Mars 2020 Helicopter Mission — NASA’s Ingenuity Helicopter.