Introducing WPGulp: An Easy to Use WordPress Gulp Boilerplate

Ahmad Awais
While this article is still helpful for beginners. It is a bit outdated. WPGulp has evolved a lot. Make sure you read the official documentation at WPGulp’s GitHub Repo — I’d ask you to star the repository to keep up with the updates.

So, you have never used Gulp before? I am here to help you get started. Yes! You can use WPGulp and ask as many questions — in the comments below — as you want. And I will make sure you get a kick-start in professional WordPress Development.

I have had been using Gulp for over two years now. Gulp makes things easier; it is simple to use JavaScript-based task runner. You can use Gulp to automate bits of your workflow.

If you are a subscriber to this blog, then you might have come across my Advanced Gulp Workflow for WordPress Themes. My workflow has changed a lot since then, but you can still get a pretty good idea of just how powerful Gulp is.

I open sourced my advanced gulp workflow which I use while building premium WordPress themes http://t.co/evardVlS5O pic.twitter.com/wawo4z1qES

I wrote about Gulp in August, this last year. To my surprise, what I thought was a mere brain_dump() turned out to be a popular post in the WordPress community. Most of the feedback was pretty great, but quite a few people asked for a beginner-friendly version of that post.

While I was thinking of building a boilerplate for Gulp, one of my friends Roy Sivan invited me over to talk about Grunt vs. Gulp which is best for your WordPress build? at a podcast called TheWPCrowd. For that podcast, I created this boilerplate and named it WPGulp.

Make sure you star the WPGulp GitHub Repo for updates!

WPGulp is a Gulp boilerplate for your WordPress project (type agnostic i.e. works for both WP plugins and themes). Right now, it is built with beginners in mind, but in the long run, I have plans to put more branches at this repository with portable Gulp tasks. So, go ahead and Star the repository. (Or follow me at GitHub).

WPGulp Boilerplate is a simple implementation of Gulp for WordPress. It implements following tasks:

Let’s begin with the configuration. Since we are discussing Gulp here, I’d like to avoid any explanations related to Node, Terminal, Git, etc. When I started using build tools, I didn’t know anything about these terms except their names, of course. So, you need not to worry about it. Once you set it up, you’ll look back at your old projects and will laugh out loud at yourself (Too soon?).

P.S. I’m a Mac user, and all these configurations are meant for a Mac user. But I’m sure you can find more info about Windows or Linux based setup online. 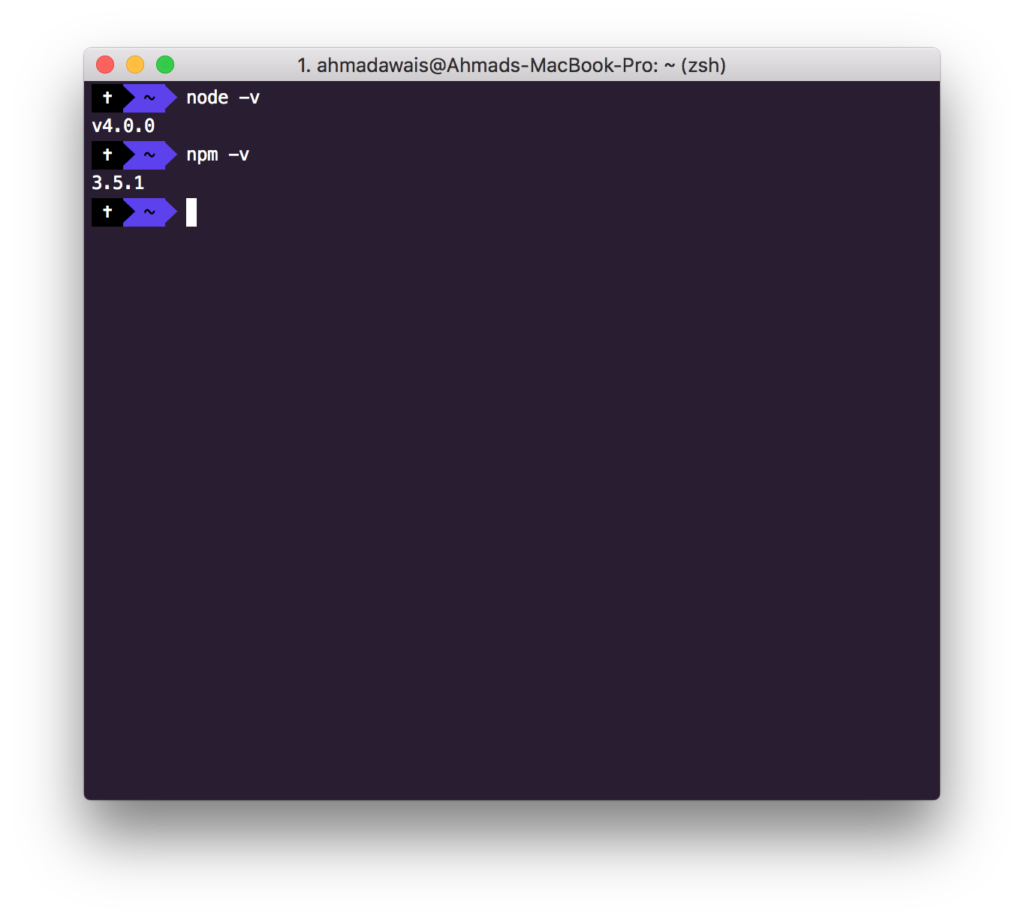 Before you start using Gulp, you need to install Node, which will also install NPM i.e. Node Package Manager. You only need to install this once. Node.js can be downloaded for Mac, Windows, and Linux at nodejs.org/download/. You can also install it from the command line using a package manager.

Once you have installed Node, open the terminal and enter:

The installed Node.js version number will be displayed. You can do the same for npm — the Node.js package manager — which is used to install modules.

If either command fails, check you’ve typed that command in lowercase. Still no good? Verify you installed Node.js correctly. 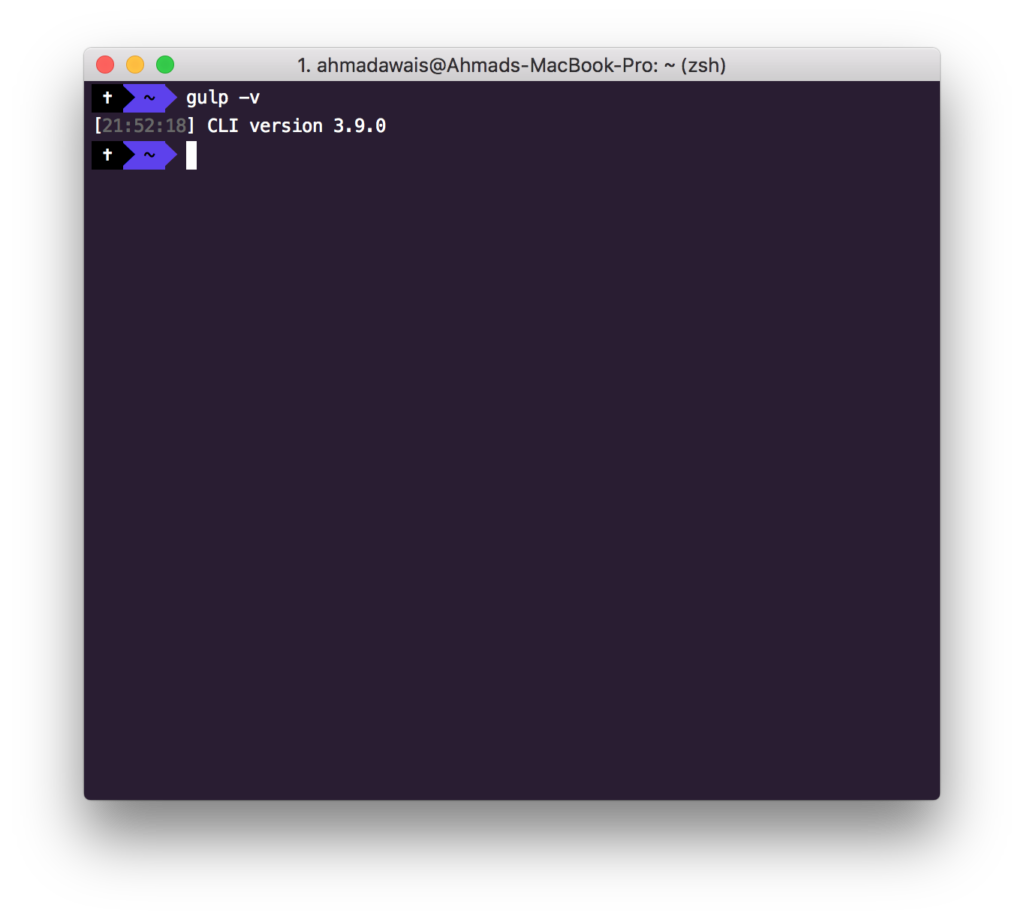 Gulp needs to be installed globally in your OS before you start using it in a project. You can install it with the following command.

The -g specifies that the install is global. Now, verify that Gulp has been installed by the following command: 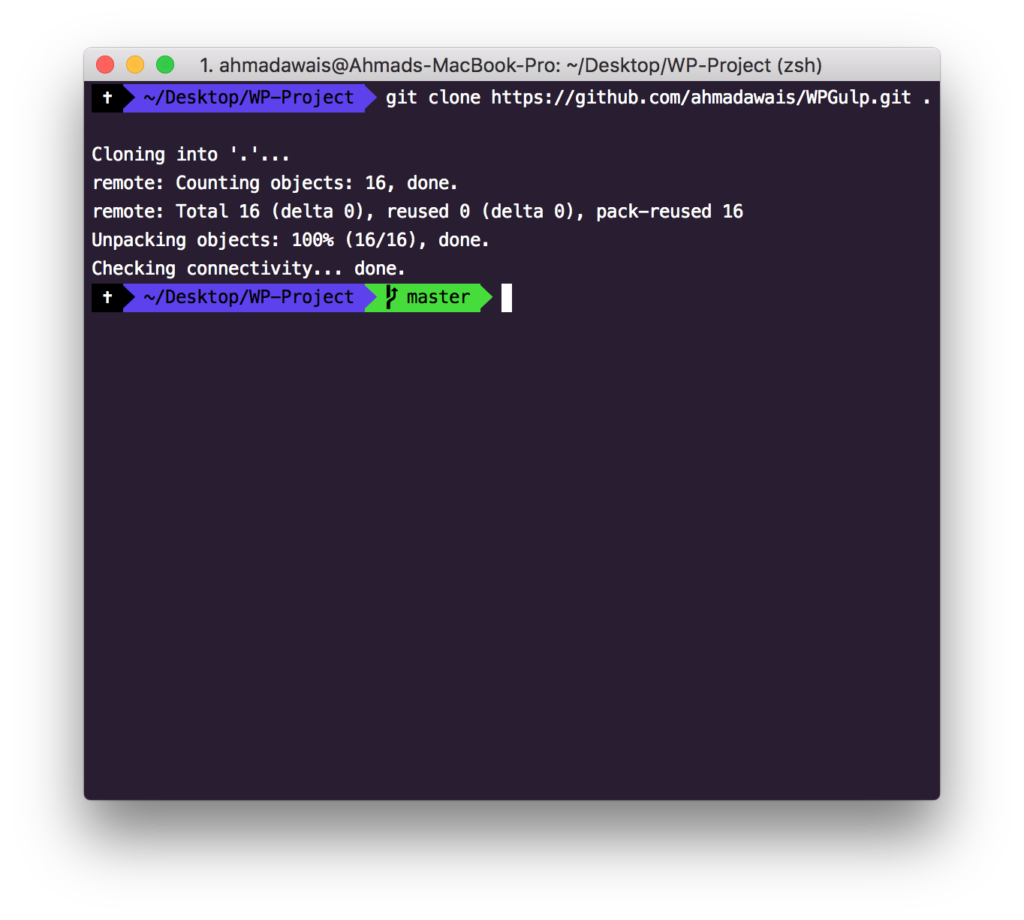 Go to your WordPress project (plugin or theme) folder and download both gulpfile.js and package.json files in the root. Or else if you are starting a new project, then you can just clone the WPGulp repository and start from there. Just like I did in the screenshot above. I created a folder WP-Project and cloned WPGulp repo inside it.

But with WPGulp you can ignore all that since that’s what a boilerplate does, you get a pre-built package.json file.

The package.json file in WPGulp is pretty much self-explanatory. There are project related details from line #1 to line #9 which you need to change, and after that, there are devDependencies from line #10 to line #22 which you don’t need to change. You don’t need to edit anything after line #9. These are the gulp plugins we will install in our project. 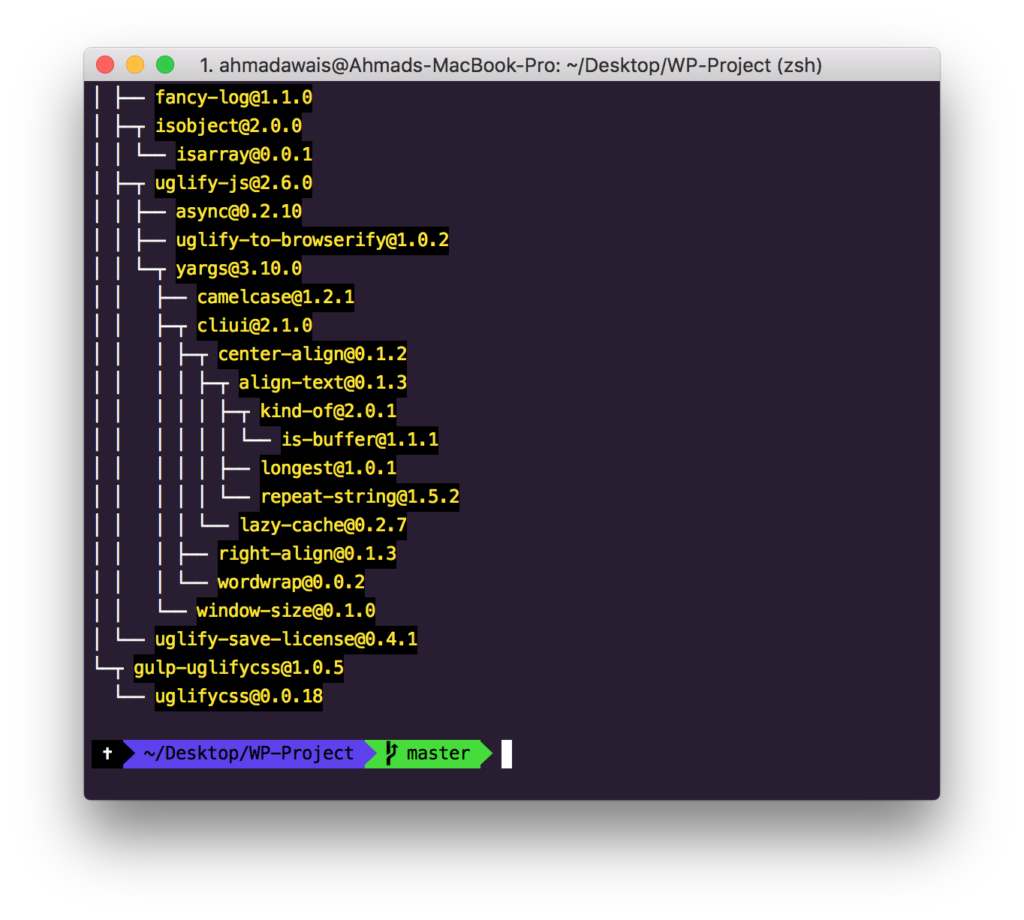 So, after adding both gulpfile.js and package.json files in the root folder of your WP Project, run the following command.

This will create a node_modules folder (where Gulp and plug-in code resides) within your WordPress project folder, which in my case is WP-Project . The above screenshot shows everything got installed without any error. You can ignore the warnings (if any show up in the terminal while installation is being run).

Gulp needs a gulpfile.js file in the root folder of your project to work. I started using Gulp only because it made more sense to write code over configuration (since Grunt has a JSON-like syntax while Gunt is JavaScript).

The Gulp API contains only 4 top level functions. Which are:

That’s it. No you know almost everything there is to Gulp. Think of Gulp as a stream of data; you can input anything anywhere in the stream and take an output of anything anywhere along the way (Confused? Let it go). gulp.src uses .pipe for chaining its output.

Let’s take a look at the gulpfile.js file present in WPGulp. I have built a portable file which can be used with any WordPress project. It consists of following portions

In this portion, you can define where your files are present and where you want to store the output. And which files you want Gulp to watch for changes. Read the comments to understand the code below.

All the plugins that are being loaded are present in this portion. One could use the gulp-load-plugins package to load plugins, but I like to keep control of what is getting included and what isn’t, which is why I choose to include plugins this way. It also helps in debugging while updating Node or any other package. Read the comments to understand the code below.

Make sure that your WordPress theme base stylesheet begins with /**! otherwise, the minifycss might remove the WordPress comment at the top. Which could render the theme useless since WP won’t recognize it as a theme. You can check a demo WordPress theme implementation of WPGulp at WPGulpTheme. Moreover, read the comments to understand the code below.

Concatenating JavaScripts and uglifying them can help speed up the page load time. Read the comments to understand the code below.

Same here, concatenating JavaScripts and uglifying them can help speed up the page load time.Read the comments to understand the code below.

Finally the default task, which will trigger all the other tasks in our file. Read the comments to understand the code below.

That’s all there is.

The Complete Code of gulpfile.js#

Here’s the complete code of the gulpfile.js file. 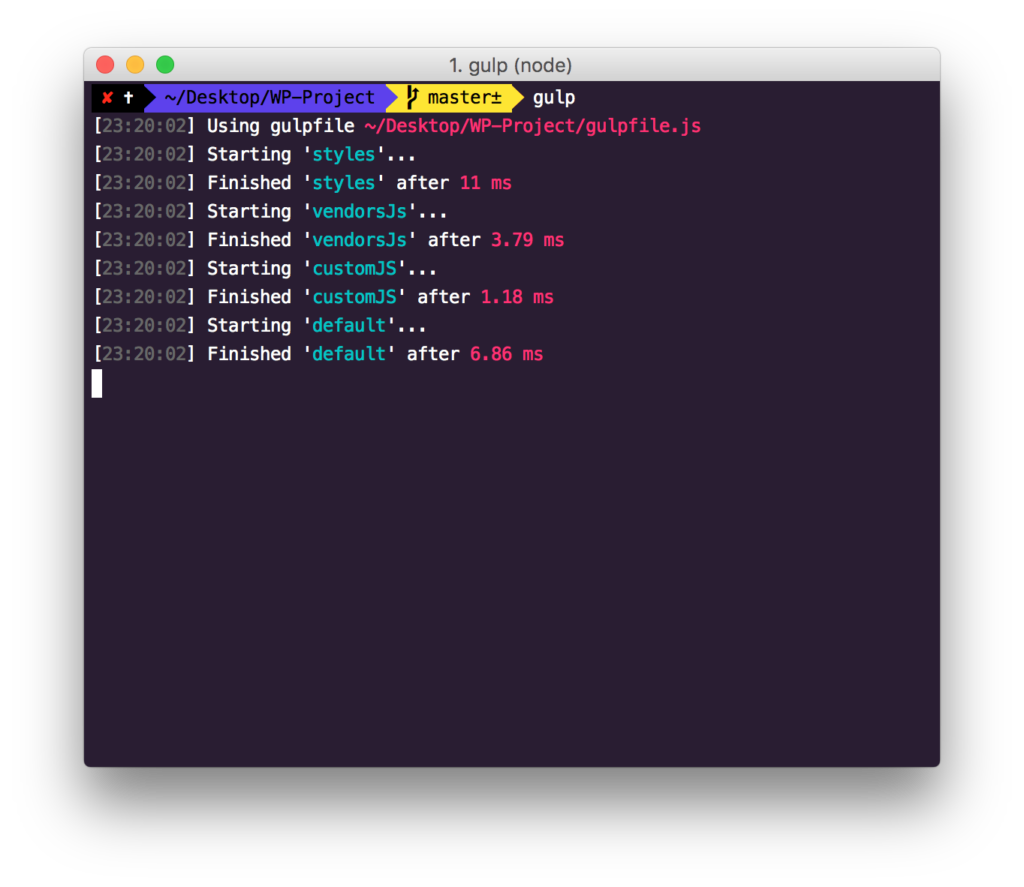 Finally, after configuring the gulpfile.js, you need to run the gulp command, which will run the default task, which in turns triggers the styles, vendorsJs, customJS tasks and finally starts watching your .scss and .js files. So, here is the command:

Whew! That was a lot. Looking forward to your comments. Let me know if I missed something or if you didn’t understand a step or two.

Here are the resource links, just in case

Since I wrote this article, WPGulp has grown a lot and it now supports the following tasks.

While this article is still helpful for beginners. It is a bit outdated. WPGulp has evolved a lot. Make sure you read the official documentation at WPGulp’s GitHub Repo — I’d ask you to star the repository to keep up with the updates.