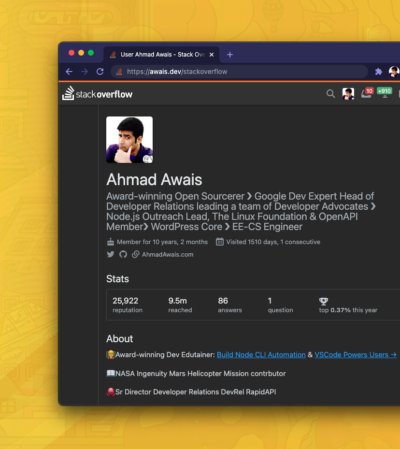 As a full-time open-sourcerer, I’m humbled to share that I’ve won awards for my open source work and prestigious titles like Google Developers Expert. But as an indie-maker just like any of you, I struggle with many basic things, have all kinds of fear, and haven’t figured out life.

In this post, I share what it feels like being an Independent Marker, Full-time Open Sourcerer, and a course author. Especially nowadays, amidst the coronavirus outbreak.

I pre-launched a course NodeCLI.com — this is my first time pre-launching a course with pre-order stuff and all. And honestly, it was super scary to do that.

Takes a lot of guts. The constant fear of failure after taking people’s money is not a good thing. As you may know, I launched VSCode.pro before this one, which has done very well. Over 14,192 developers learning power user workflows and switched to VSCode.

I wanted to launch this NodeCLI.com course weeks ago but just kept testing the entire setup, in hindsight I might have been dealing with imposter syndrome, procrastination, and fears of being an indie maker.

As an indie-maker, I wanted to talk about this in a bit more open fashion. As a creator, we struggle with a lot of things. It’s about time I share mine. Maybe some of you can relate.

What if no one buys what I am building?

When I was working on my VSCode course I was afraid. What if I failed? What if everyone found out, my workflows aren’t that great. You know maybe this just me who likes to create multiple cursors and write quickly.

What if I succeed?

Took about 1.5 years to launch my first course. I wrote about how I created my own course platform. Then when I launched my VSCode course, I had a great first two months; I hit about 900 sales and about USD 75,000 in revenue.

Then it hit me. The fear of success. Why did I succeed and now that I did, am I teaching something wrong. Because believe me, there were hundreds of people who tried to put me down.

I received emails, tweets from grumpy developers someone thought I launched the course they eventually wanted to launch, someone said “it’s all available for free”, and one person actually reached out to tell me how I’m the worst person on this planet.

I dealt with all of this in my way. I gave away thousands of free subscriptions and to date over USD 100,000 worth of course materials to people who need it. Donated to the Laptops for Developers initiative in Nigeria.

And some times, I felt so down, I just tweeted about it and the Dev community came to rescue. It’s all kinds of weird. Creating products, putting yourself out there.

Now that I am creating a new course on helping developers automate their repetitive grunt work with Node.js, I thought instead of waiting for the course to be complete, I should get out of my comfort zone and announce it right away.

But wait. This time it’s different. Yes, I have done this before but I never really asked for developers to bet on my work in advance. That’s a different animal. So, instead of announcing the course, I started testing it again and again.

Yes, I found a couple of things that should have been fixed but hey it just delayed everything. I thought, not everyone would want to buy the course that’s still being recorded. So, I built a way to help people subscribe for free.

That was actually a good idea, now that there are around 678 people subscribed to the list, I know for a fact that people want to learn how to build CLIs.

Now that the NodeCLI site was ready. Instead of announcing it, I thought maybe I should build a couple more CLIs first. You know to show everyone that I know what it takes.

I have literally built hundreds of automation projects, most of them are open source. But have I really build a good CLI? I should build something super fancy right. How about graphs in the command line? And table layout with all the statistics of #COVID19 coronavirus disease.

…and that’s exactly what I did. I went ahead, built, and released corona-cli. So, far I have spent several hundred hours improving (read as perfecting) the CLI.

Well, yes it has worked wonders. It ranked #2 most trending JavaScript project for about a week. I was listed as the #1 Top JavaScript Developer on GitHub trending and lived to tweet about it.

…let me sum that up for if you missed the point here.

In an effort of releasing a pre-order / pre-launch stage course where developers could buy the course at 60% off and save a bunch of time automating grunt work, learning Node.js — I felt guilty and thought I must prove my worth. That led to the side-effects of over-engineering and launching stuff for free — that’s all super helpful to the community, sadly doesn’t help pay the bills.

What an oxymoron? That’s seriously what I did. I announced my course super quietly there on Twitter in the form of a tweet.

Support an indie-maker during #COVID19

What I mean by quiet is that I didn’t write a blog post about it, I have over 100k subscribers in my newsletter and millions of people visit my blog every year. I’ve been blogging for about 17 years now. And I’m still hesitant to announce this pre-order stage course to my subscribers due to the mix of all the fears I listed above.

I will eventually get to it. I have been preparing all week to send that email and I think next week is when that will happen. But for now, I felt so out of my skin that I had to write this post. And I also tweeted the following:

😁 DEVELOPERS: I'm recording my https://t.co/NTQYI6dGd1 course. And I need your help. Tell me what would you like to learn to automate with Node.js and #JavaScript. I'm crowd sourcing ideas for at least 10 CLI projects in this course.

I know I am not alone in this. I know many many of you face the same fears as I do. I wanted to document this to share my journey and to share that it’s natural. Sometimes it sucks. And also to share with everyone that it takes a lot of work, guts, effort, and mental strength to put yourself out there. Go easy on creators, builders, indie-makers.

If you face the same fears. I bet it would help if we talk about it. Let’s discuss that in the comments below. Feel free to share whatever is it that you struggle with as a developer.

And before my imposter syndrome gets the better of me, let me plug: If you ever wanted to build a CLI with Node.js to automate anything you could imagine, then signup at NodeCLI.com — I bet it’s going to be worth it. By the end of the course, you’ll build tens of automation projects.

This course is for both; absolute beginners (creating a CLI to keep track of the latest TV season episode you watched or finding out when’s the next one due) to doing things like typing one word to reboot your WiFi router.

So, far that’s all I gotta say. Share your war stories of being an Indie maker, I hope it inspires others to do the same.